Celebrating Our Presidents: Learn About the Faces on Your Dollar Bills

This Presidents Day, Origin Bank is celebrating some of our nation’s greatest leaders — the ones on our dollar bills! If you’ve ever been curious about America’s currency, keep reading. We’ll go back in time to tell you a little bit about the presidents and influential figures on the notes in your wallet.

One-dollar bill: George Washington. Washington served as the first president of the United States, overseeing the growth of our nation from 1789 to 1797. He was a celebrated military figure, serving as commander-in-chief during the Revolutionary War before becoming president. Washington is a Founding Father and is often referred to as the “father of the country.” It’s no surprise that he was chosen to be featured on the US’s most popular bill. The Bureau of Engraving and Printing prints more than 16 million new one-dollar bills every single day.

Fun fact: When Washington took office, the USA consisted of only 11 states. 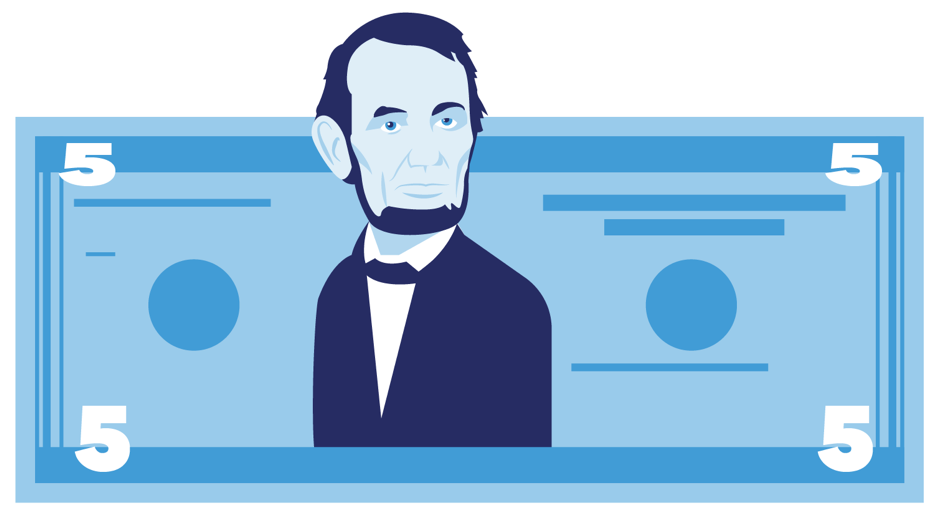 Five-dollar bill: Abraham Lincoln. Known for leading our nation through the Civil War and abolishing slavery, Lincoln is a key figure in US history. In addition to tackling tough issues of land, civil rights, states’ rights, and industry during and after the war, he also helped modernize the US economy by promoting railroads, banks, and tariffs during his time as a congressman and president. With a background in law, Lincoln was a strong arguer and speaker known for his famous Gettysburg Address. He was assassinated in 1865.

Fun fact: Abraham Lincoln was 6 feet 5 inches in height, which is very tall for today’s standards and unbelievably tall for his time!

Ten-dollar bill: Alexander Hamilton. Although he never served as president, Alexander Hamilton still played a major role in our nation’s history. He served in the Revolutionary War as an aide to George Washington and is one of our Founding Fathers. During his time as a statesman, he helped develop guidelines for constitutional interpretation and led the establishment of the first national bank.

Fun fact: Hamilton founded The New York Post, a newspaper that is still in circulation today.

Twenty-dollar bill: Andrew Jackson. Jackson is viewed as the founder of the Democratic Party and served as US president from 1829 to 1837. An accomplished military leader, Jackson was known for his leadership in the War of 1812 and his victory against Britain in the Battle of New Orleans. In 2020, new designs for the $20 bill will be revealed, with Harriet Tubman replacing Jackson as the main figure on the $20 note. Jackson’s face will be placed on the reverse side.

Fun fact: Jackson was nicknamed “Old Hickory” for his tough-as-wood tactics on the battlefield.

Fifty-dollar bill: Ulysses S. Grant. Praised as a strategic military commander and promoter of civil rights, Ulysses S. Grant was the final commander of the Union Army during the Civil War. Grant would eventually serve as the 18th president from 1869 to 1877. During his presidency, Grant continued reconstruction efforts to reunite the country, led efforts to create peace with Native Americans, and stabilized the economy through a number of initiatives such as the gold standard. After his presidency, Grant toured the world for two years promoting the US as a major player in global affairs and economics.

Fun fact: Grant’s legal name was Hiram Ulysses Grant. The “S” initial in his name was the result of a typo when Grant was sent to West Point. Grant was never able to correct the record!

Hundred-dollar bill: Benjamin Franklin. Benjamin Franklin is one of history’s brightest “Jack of all trades.” Although Franklin never served as president, he helped shape US history through his writings, inventions, and involvement in politics. Franklin was a successful writer and editor, scholar, and scientist who is considered a Founding Father of our country. He established the University of Pennsylvania and served as governor of Pennsylvania. Franklin is credited with the invention of bifocals, the Franklin stove, and the lightning rod, among others.

Fun fact: Although he’s considered one of the most brilliant men in history, Franklin only had two years of formal schooling.